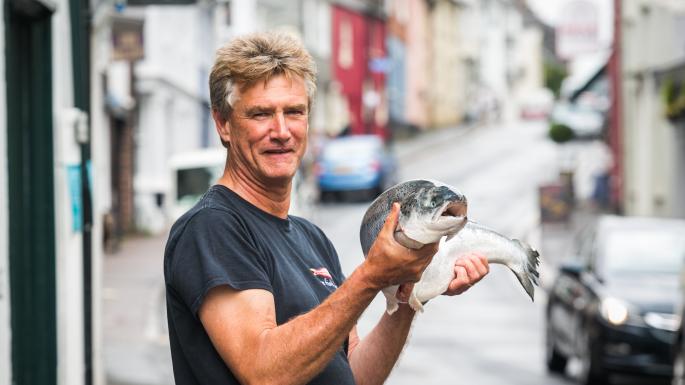 It is said that Ashburton, a small town on the edge of Dartmoor, was once well known for a champagne-style drink called Ashburton Pop. Legend has it that the fizzy stuff stopped flowing in 1785 when the recipe was lost.

These days traders could be forgiven for wondering if they’ll be able to afford a pint of ale never mind the bubbly. A downturn in trade hit when the last bank in the community, Lloyds, closed its doors in 2016.

Nick Legg, who runs The Fish Deli, says: “We were all very worried, and extremely angry that the bank had no scruples about leaving the town with no nearby banking facilities and even worse, no Cashpoint.”

Partly thanks to the efforts of Stuart Rogers, the postmaster, some cheer among independent retailers can still be detected in the town.

He is at the heart of a campaign to keep Ashburton and its traders in business even as bank branches appear to be going the way of Ashburton Pop.

Rather than descend into bitterness at Lloyds’s decision, Mr Rogers, 49, has organised a marketing drive to remind visitors that independent retail isn’t yet a thing of the past.

As well as working to capitalise on events such as a food festival to draw people into the town, Mr Rogers is determined to highlight the potential of post offices. “Banks are closing quite regularly in this part of the world. We can’t stop that,” he says. “What we can do is show what the post offices can do to get us through the autumn and the Christmas trading period.”

In March Royal Bank of Scotland said that it planned to close 180 branches and in April Lloyds outlined its desire to shut 100. This year HSBC is closing 117. The Post Office believes that it can ease the pain for small companies and boost business for postmasters such as Mr Rogers.

In January it agreed arrangements with the banking industry that standardised the services that personal and business customers received in its 11,600 branches.

The Post Office’s banking framework agreement means that it can offer cash withdrawals, deposits, balance inquiries and give change to customers of almost all banks.

Martin Kearsley, director of banking services at the Post Office, said: “If you ask anyone what they want in their village it will be a pub, a duck pond, a church and a post office. We really are part of the DNA of the country but we need footfall. With the demise of the things you once went to the Post Office for like [road tax] and TV licences we need to find other relevant services that will keep us at the heart of communities.”

Not everyone is convinced that the Post Office is ready to step into the breach.

In 2015 the Access to Banking Protocol established procedures which set out the steps that banks would take when closing a branch to ensure that customers in rural and deprived areas did not lose out, including working with communities to establish alternative provision.

A review of how a banking protocol was progressing, produced last year by Russel Griggs, a small business banking expert, uncovered concern about the extent to which Post Office branches could meet their needs. “Small businesses were especially critical,” he said, particularly about the time it took for the Post Office to count and accept deposits.

The Federation of Small Businesses says that the Post Office is a poor substitute for banks and its services are “simply not up to scratch”.

It says that cash and cheque clearing is often processed more slowly than in a bank and that basic services such as inter-account transfers are not offered.

Mike Cherry, its national chairman, says: “We need to see substantial improvement and standardisation of the Post Office’s offering if it’s to be considered a viable replacement for bank branches.”

The organisation says that the loss of “in-person bank branch support” and advice before major banking decisions also comes as a blow to many smaller companies.

Mr Kearsley says that some of the FSB’s criticisms are unfair. “We are in the process of rapid change and we are up to scratch to handle the kind of transactions that small businesses need day-to-day,” he said.

Ian Renwick and Gillian Mann run Jaded Palates Stores, a wine retailer that has stores in Ashburton and nearby Chagford, which has no bank or Post Office.

If you ask anyone what they want in their village it will be a pub, a duck pond, a church and a post office

Mr Renwick says that a well run Post Office banking service is preferable to the alternative. “Having access to banking facilities and change-making is so important to the smooth running of our operation,” he says. “The contrast with Chagford is stark. It is simply not viable for us to use it — there may as well be nothing at all, from a business point of view”.

Yet Professor Griggs’s review concluded that only 11 per cent of customers whose bank branch closed then carried out more transactions with the Post Office. “I do not think either the banks or indeed the Post Office itself has done a good enough job in making people aware of what they can do in terms of banking at the Post Office,” he wrote.

Mr Kearsley appears to agree: “There isn’t enough awareness that the Post Office can offer an extremely good daily service for small businesses,” he says.

Mr Legg says: “If it was not for Stuart’s hard work in pushing the post office into offering day-to-day business banking and a fully functioning cash machine, I believe the town would be facing an economic slow down.”

The FSB says that others still need convincing. “A very amateurish process,” is how one member described the service at the Post Office when the local bank closed.

It says that there have been “several instances” of villages and towns running out of money in peak periods of economic activity” as ATMs and Post Offices ran out of cash.

Mr Rogers says that he has had to extend opening hours, from 6am to 11pm in one case, to provide cash when the ATMs ran out.

The fear is that not every postmaster will be so diligent.

Mr Rogers wants the FSB to join a meeting his team is organising with his MP, the Conservative Mel Stride, to discuss how they can do more to help communities left without a bank.

Mr Kearsley agrees: “Are there new services that we could offer small companies over the counter? I’m sure there are. We would welcome working with the FSB to understand exactly what the requirements might be so small companies and communities can thrive.”

Dry cleaner has been through the wringer since NatWest left town
Debbie Hurst runs Market Place Dry Cleaners in Sturminster Newton with her husband Peter (Rosie Stratton writes). The Dorset town was hit by the closure of its NatWest branch last year. The town is due to lose its final remaining bank, Lloyds, at the end of next month.

The shop has lost business as a result, she says. “Trade was definitely more regular before the banks started to close. We had a greater income and on a more regular basis. Nowadays, people are visiting the town less frequently because a lot of business has moved to larger towns which still have high-street banks there. The lack of available places to withdraw cash means footfall has declined.”

Ms Hurst has switched her bank account to make online banking easier, and makes cash deposits through the town’s Post Office but it’s not an ideal solution, she says.

“You can be standing there for ages while packages are getting sent off and people are doing their passports. You’re standing in a queue that’s very open and exposed and we’ve all got deposits of cash in our hands so on a long term basis I don’t think it’s the safest option.

“I think it is wrong for the banks to keep assuming that the Post Office can continue taking on [the additional] demands and if it continues, the banks should give more professional support to it,” Ms Hurst, 52, says.

Russel Griggs, a small business finance expert who has reviewed bank closures, has suggested that the banking industry arranges a cash collection service to help to ease the burden.

Ms Hurst adds: “From a town point of view, we need to keep that Post Office going because if we lose that service, there will be a serious decline in the town. I also think that the Post Office is possibly helping us to hang on to the customers that we have got.”