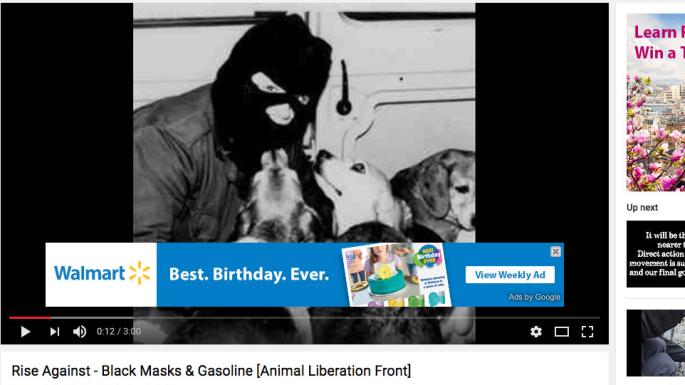 Some of the biggest brands in the US pulled hundreds of millions of dollars of advertising from Google and YouTube last night as the scandal over extremist content reached the internet giant’s home country.

Last night Johnson & Johnson, the US pharmaceutical multinational, became the latest brand to pull its advertising from YouTube. Verizon, the mobile phone operator and fifth- largest US advertiser, AT&T, the world’s largest telecoms company, Enterprise, the world’s biggest car rental company and GSK, the British pharmaceutical company with a strong US presence, all suspended advertising on Google’s video platform after The Times discovered that they were promoted next to extremist content.

More than 250 organisations including the British government, Toyota, Tesco and McDonald’s have already stopped UK advertising on YouTube after an investigation found that they were promoted on videos posted by hate preachers, rape apologists and extremists banned in Britain.

“This has ramifications across the digital advertising market,” Brian Wieser, a US media analyst, said. “Google don’t seem to fully comprehend the scale of concern. The scrutiny is now going to be substantially greater.”

Verizon, which spent $2.5 billion on US adverts in 2015, suspended its entire digital advertising operation after learning that its brand appeared on YouTube videos posted by Wagdi Ghoneim, an Egyptian cleric suspected in the US of illegal fundraising , and Hanif Qureshi, whose teachings inspired the assassination of a Pakistani politician.

“Everyone involved in this new age of digital advertising needs to do more,” a company spokesman said.

Although Google disabled advertising on Ghoneim’s YouTube page for UK brands, it appears to have allowed US commercials to continue to play there. Ghoneim, whose YouTube videos have been seen 31.4 million times, is likely to have received substantial revenue from the site, which typically pays out £6 every 1,000 times an advert is viewed.

AT&T also removed all Google display advertising yesterday, saying it was deeply concerned that its commercials appeared on extremist videos including one promoting the extremist Animal Liberation Front. AT&T adverts were also placed on YouTube videos showcasing an Islamic State flag and another broadcasting the sermons of Anwar al-Awlaki, a senior al-Qaeda recruiter killed by a US drone strike in 2011.

“Until Google can ensure this won’t happen again, we are removing our ads from Google’s non-search platforms,” an AT&T spokesman said.

Enterprise and GSK also pulled all YouTube advertising in the US after appearing on videos posted by Ghoneim. In total, a 48-hour analysis by The Times found 28 big US companies advertised alongside hate content.

“It appears technology has gotten ahead of the advertising industry’s checks and balances,” an Enterprise spokeswoman said, referring to complex digital tools used by media agencies to target potential customers wherever they browsed on the web. A GSK spokeswoman said it had raised concerns directly with Google and would continue to work with them to develop adequate safeguards.

Johnson & Johnson said that it was taking the matter very seriously. A spokesman added: “We have made the decision to pause all YouTube digital advertising globally to ensure our product advertising does not appear on channels that promote offensive content.

“We will continue to take every measure to ensure our brand advertising is consistent with our brand values.”

Other brands advertised on extremist videos include KFC, the fast food group, and Beam Suntory, the maker of Jim Beam whiskey. Beam Suntory said it was suspending all YouTube advertising. KFC said that it was urgently reviewing its position.

Some of the videos identified by The Times had been posted years ago, raising questions about Google’s ability to take down hate content. A video promoting the Animal Liberation Front showing pictures of masked men holding animals with the phrase “Until every cage is empty” was posted in September 2011. Walmart, the US retailing giant whose ads appeared on ALF videos, declined to comment.

On Tuesday, Philipp Schindler, Google’s chief business officer in the US, apologised to advertisers for placing their brands next to extremist content. The company said it had begun an extensive review of advertising policies.

HOW THE TIMES BROKE THE STORY

February 9 The Times reveals that Mercedes Benz, Waitrose and Marie Curie are among brands to have unwittingly funded extremists by advertising on their websites. Industry insiders accuse big media agencies of pushing clients into digital advertising to boost their own profits

February 10 Charities and universities are shown to be among dozens of publicly funded organisations funding fake news, as their adverts appear on false or outrageous websites. Fashion retailer J Crew, Argos, Mini, Topshop and Dropbox are found advertising on piracy websites

March 17 Havas, the world’s sixth largest advertising agency, pulls 240 UK clients out of Google, which announces a review of its advertising policies

March 22 Boycott moves to the US