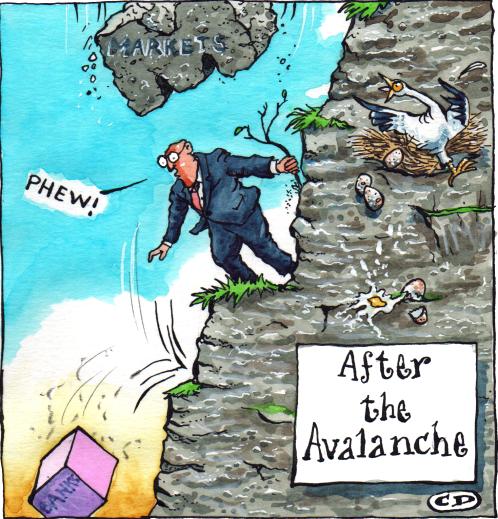 In the rush to reform banks over the past decade, to end too-big-to-fail, correct warped bonus incentives and inject ethics into the City snakepit, one simple fact has been forgotten.

The financial crisis didn’t start with the banks. It started in the markets. Banks were bailed out because they were the point where finance touched the real economy. Ten years on, markets reach out all on their own. Lenders may largely be fixed, but don’t presume that will stop another disaster.

Next Thursday will mark ten years since the Bank of England came to the rescue of Northern Rock, sparking the first run on a bank in Britain for 150 years. Rock’s troubles had started a month earlier, though, when BNP Paribas’s decision to bar redemptions on three funds so spooked the market that investors sat on their cash. As funding lines closed, Northern Rock couldn’t replace the short-term money it had borrowed to lend out as 25-year mortgages. Without the Bank’s “lender of last resort” backstop, Northern Rock would have defaulted on its creditors. At that point, killed off by the markets, it was still profitable.

If Northern Rock was the societal frontline of the financial crisis, the link between what was going on in markets and what was happening on the high street, BNP was only one step back. Behind BNP was the real maelstrom, a sub-prime virus infecting everyone. Even those who were not sick were suffering the symptoms.

American sub-prime mortgages, wrapped into investment products, had started to go bad at the end of 2006. By August 2007, no one wanted to touch these bundles of toxic assets and their prices were plummeting. As values fell, many investors were forced to sell. To cover their losses, they started offloading other assets, sending those prices lower, too. Markets were in a catastrophic race to the bottom.

Once the dust had settled, the scale of the damage caused by the panic became clear. Actual losses on sub-prime mortgages ended up totalling $300 billion, big but not enough to bring the entire global banking system to its knees. The sell-off, though, had amplified those losses into asset writedowns of well over $2.5 trillion. The market had eaten itself.

Since 2008, fixing finance has been all about fixing the banks to build an institutional firewall between the bedlam of the market and the real world. A decade ago, the lenders were less firewall more petrol-soaked firelighter. Royal Bank of Scotland had a capital ratio of only 1.9 per cent on the eve of the crisis. If it lost only £2 on every £100 lent, it was bust. Today, it has a ratio of 14.9 per cent.

Overall, UK lenders have raised more than £130 billion of capital since 2008, twice as much as they lost during the crisis. They have £700 billion of liquidity, assets that can be easily sold such as government bonds, compared with tens of billions in 2007. Had Northern Rock held more liquid assets in 2007, it could have used them to repay short-term creditors rather than begging the Bank for funds. New resolution plans have put creditors on the hook for losses before taxpayers, and seven-year deferrals and clawbacks on bonuses are deterring bankers from taking short-term risks. Barring a cataclysm, the banks are not the problem.

The problem is where it always was, in the markets. The difference is that markets now brush right up against the real economy. Since 2008, UK banks have cut lending to big business by £90 billion and markets have increased their lending by £130 billion to about £400 billion. Today, banks account for only half the UK financial system. The other half is the market — insurers, mutual funds and pension funds — and is less regulated. It is also inherently more herd-like. The risk, as Alex Brazier, the Bank’s executive director for financial stability, says, is “not whether they can survive the unexpected, but how they act when the unexpected happens”.

Rather than lend directly to a company, investors buy bonds — a form of tradable debt than can be bought and sold like a share. But that means the asset has a price. Pension and insurance rules can force funds to sell if prices fall, triggering a death spiral. The firebreak is supposed to be the market-makers, brokers who stockpile assets, but even the biggest, such as UBS (chaired by a former central banker), have said they can’t stomach the risk any longer and would rather pull out and let prices tumble. This is not simple theory, it happened in the crisis and twice more since.

In 2008, the most blue-chip of corporates were forced to pay 9 per cent interest for market finance, the kind of rate until then reserved for small risky businesses. Higher-risk companies were cut out completely. Unable to invest and subject to punitive refinance rates, business had to retrench and, with banks also withholding credit, the country slid into recession.

The recession happened that way round, not the way Gordon Brown would have us believe. The economy was shrinking almost six months before the collapse of Lehman Brothers turned the “credit crunch” into the “global financial crisis”. Similar, though lesser, stories can be told of the market shock after the 2013 “taper tantrum” and two years later when China’s stock market plunged 30 per cent. Both times, the global economy slowed.

In a sense, financial markets are stronger than ever. Globally, assets under management have increased by two thirds since 2008. In another, they are incredibly fragile. Popular open-ended funds, for example, have built liquidity weakness into their models by allowing investors to redeem their money immediately. After last year’s Brexit vote, commercial property funds staged emergency asset sales to give investors their money back. It got so bad that they reverted to BNP’s tactics and suspended redemptions, breaking their own rules.

The Bank is alert to the risks. It has powers to step in as “market-maker of last resort”, to buy corporate or other bonds and put a floor under the price. It has reorganised the chaos of derivatives markets by forcing off-exchange trading through central clearing houses. If a clearing house hits trouble, the Bank will give it cash to keep going.

The idea is to keep markets lubricated no matter what, but it’s not without risk. In the next crisis, through the Bank, the state will buy assets, be they sub-prime mortgages or corporate debt, and hope that it will get its money back. If that doesn’t work, it will probably bail out the banks. A lot has changed in ten years, but some things never do.