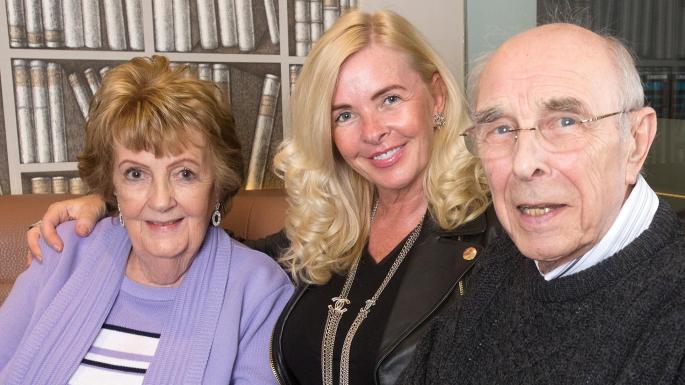 Until this year, Nigel and Jane Jones had happily been covered by Halifax home insurance for 35 years. In all that time they had never made a claim, and had always lived in the same house in Worcestershire. They were shocked, then, to discover that they were being charged more than three times as much as a new Halifax customer. The couple signed up for buildings cover in 1982 and added contents insurance in 2005. “I suppose I did the usual thing of not really checking the price until about three years ago,” said Nigel, 65. After the renewal premium soared to well over 1,000 last year, however, he began to suspect he was paying too much. “That’s when I started ringing them up and asking, ‘Is this the best you can do?’ ” 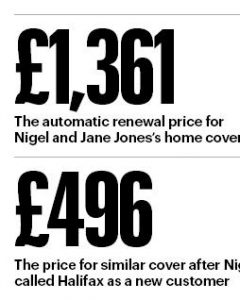 The best Halifax could do, he was told, was 1,096 – a saving of more than 200 thanks to a “valued customer discount” and a slight drop in the level of cover.

When the renewal premium came in at 1,361 this year, however, Jones felt enough was enough: “I rang them and they said they couldn’t do owt about it, so at that point I decided to leave.”

A month after cancelling the policy, he called Halifax. “I asked them for a quote for this same address and they gladly gave me one,” said Jones. “I went through what I wanted and they quoted me their Ultimate home insurance package – total annual premium 496 plus 50 cashback as a new customer.”

The price offered to the couple as customers of three decades was 205% more than the premium for a new one. In a letter last month, Halifax wrote: “After considering the additional information and the issues you raised, I’ve not found sufficient supporting information to agree that you have been overcharged.”

Sadly, the Joneses’ case is not unusual. Loyalty is routinely punished across sectors such as energy and broadband as well as insurance. Last week, the chief executive of the leading insurer Aviva criticised the “dysfunctional” motor cover market, saying existing customers subsidised the “too low” prices used to tempt newcomers.

Gareth Shaw of the consumer group Which? agrees. He said: “Part of the problem is down to insurers’ methods for securing new customers. By competing to get to the top of the comparison tables, they offer their lowest prices and that comes at a loss to them.

“A loyal customer is then seen as an opportunity to ramp up the price over a number of years to recoup the costs of acquiring customers in the first place.”

He added: “One Which? member wrote to say her 70-year-old parents had been with the same breakdown cover provider for 25 years, and were offered a renewal quote for 145.99, which after much haggling was reduced to 80. They then saw a newspaper advert for the cover for new customers for 29.99.”

Earlier this year, Money revealed how energy and broadband companies were charging loyal customers, in particular vulnerable elderly customers, hundreds of pounds more than new ones. Doreen and Ronald Miller, who are in their eighties, were paying Scottish Power 169 a month for gas and electricity. Their daughter, Jacqui Miller-Charlton, who lives nearby in Tyne and Wear, was quoted 42 less by the supplier.

Money also found examples of home insurance companies charging loyal customers 10 times more than they did new recruits. In one case, More Than quoted 93-year-old RAF veteran Clarence Clark, from Derby, an automatic renewal price of 546. The cost of the home contents policy included a “loyalty” discount of 60 for Clark, a customer for 25 years. His son, Chris, 68, found a similar deal from the same company at 82.

Last month, the Financial Conduct Authority was urged to investigate the cost of customer loyalty. A report by the Financial Services Consumer Panel expressed frustration at the behaviour of financial services companies towards long-serving clients. The Joneses’ case illustrates that the problem is not confined to vulnerable older people perhaps unfamiliar with shopping online or challenging quotes over the phone.

“The best deals will always go to new customers,” said Martyn John of the comparison website Go Compare. “By auto-renewing you are paying a loyalty tax – you’re paying for the privilege of being ripped off, basically. The only way to get the best deal is by going out and increasing competition, showing them you won’t be taken for granted.

“Don’t take your renewal letter as a notification that your premium is going up; take it as a challenge to go out and beat them.”

Nigel Jones said that when he contacted Halifax to complain, he was met with “dismissive” replies. He added that he was told he should have shopped around, which Jones argued he had – not least by calling Halifax at renewal time in recent years and giving it the chance to offer a better deal.

Whilst you would expect companies to follow customer service best practices, clearly this isn’t the case within sectors like insurance, energy and broadband. Therefore, all householders should try to negotiate down the renewal price, whether for insurance, energy or broadband, said Shaw at Which?. “If you say you’ve found a better deal, they may say they will give you a ‘valued customer’ discount – as was the case with Mr Jones – to at least bring you to an equivalent level.

“Which? has done research year in, year out on the benefits of haggling with your provider and, from tracking hundreds of consumers that are doing it, we know that the savings they make are significant.

“Companies actually expect that negotiation and not enough people do it. If they won’t budge, you shouldn’t be afraid to pack up your bags and go elsewhere.”

Shaw said customers should arm themselves with as much information as possible, including an example of what their provider is offering new customers. “It’s a useful tactic, although it depends on the provider as to whether they will accept you as a new customer if you are already an existing customer,” he said.

Don’t take your renewal letter as a notification that your premium is going up; take it as a challenge to go out and beat themMartyn John, Go Compare

When contacted by The Sunday Times, Halifax said the cheaper quote offered when Jones called as a potential new customer was for “a significantly lower level of cover from his original policy”.

The policy on his four-bedroom countryside home included unlimited cover for rebuilding and contents, whereas the new quote was limited to 500,000 for rebuilding costs and 75,000 of contents.

Jones said he had requested a reduction in his rebuilding cover when he was still a customer of Halifax, as he had felt it was higher than necessary. “I’ve been in design and planning all my life and I’ve built loads of buildings and I know that 500,000 would easily rebuild this house – with marble taps,” he said.

“I reduced that cover to 500,000 when I asked for the new quote because as a new customer I was allowed to pick, whereas as an existing customer they wouldn’t let me touch it.”

Last year, Money highlighted how the BCIS House Rebuilding Cost Index, which is used to calculate automatic increases to policies, was being used incorrectly by insurance companies, resulting in higher premiums. The Royal Institution of Chartered Surveyors, which produces the index, advises that the data should be used in conjunction with independent research, rather than relied upon solely.

Halifax added: “Mr Jones was offered the option to be quoted for this lower- cover policy when he called to cancel his old policy but he did not want to go through the quotation process.”

The Joneses found cover with Saga, at a cost of 570.

Other ways you may get stung on cover
It’s not only loyalty that is punished: insurers have other ways to squeeze money out of customers. Here’s what to beware of, according to the comparison site Go Compare.

Monthly premiums
If you don’t pay up front for your annual premium, many insurers treat your policy as a loan and charge interest as high as 73.8%.

Making changes
Some insurers charge customers to adjust a policy, with each change costing up to 60.

No-fault accident claims
Motorists involved in accidents that are not their fault may face premium increases of as much as 100 a year, even if they don’t make any claim on their policy.