It would have been easy for me to focus this week on the latest projections from the Organisation for Economic Co-operation and Development (OECD), which are for a slowing British economy at a time when the global economy is speeding up — something that does not normally happen.

And while some will say you should never believe forecasts, the OECD is merely extrapolating from what is already happening. The global economy is growing more rapidly this year while Britain has cooled — and you do not need to be Miss Marple, or perhaps more appropriately Hercule Poirot, to work out what is happening. Or, I could have focused on Friday evening’s downgrade of Britain’s sovereign debt rating by Moody’s, the ratings agency.

But while mention of anything to do with Brexit is guaranteed to get some people frothing at the mouth, which can be entertaining, the OECD forecast has been well covered. I sensed some glee behind the decision to splash it on the front page of George Osborne’s London Evening Standard, the free newspaper. And, so far, post-referendum credit ratings downgrades have not pushed up the cost of government borrowing.

It is another aspect of the OECD’s new interim economic outlook, however, that I want to focus on and it relates to the job market and looks like good news. This is the interesting fact that, across the industrialised world, the post-crisis recovery in jobs has been led by women.

The female employment rate has never been higher

Among the 35 member countries of the OECD, the male employment rate is still lower than it was in 2008 — when the economic downturn from the global financial crisis began to hit. The female employment rate, by contrast, has risen sharply compared with the pre-crisis peak. The OECD’s index of its members’ employment rates is up by about 5% for women while down by 1% among men.

Male employment has been recovering from its post-crisis lows. But it was hit harder by the financial crash and has not got back to where it was. Female employment, by contrast, suffered a smaller hit in the crisis and has benefited from a stronger recovery.

The picture in Britain follows a similar pattern, though with some differences. Both male and female employment rates are above pre-downturn peaks, though the rise in the female rate — up from 67.1% in the March-May quarter of 2008 to 70.8% in May-July this year — has been bigger than the rise in the male rate, which is up from 79% to 79.8%. It has been a woman’s world for jobs.

I have been aware for some time of the faster rise in female employment. One special factor has been the move to equalise the state pension ages — a process that has increased the proportion of women in the 50-64 age group who are in work. As the Office for National Statistics notes, the changes mean that fewer women are retiring between the ages of 60 and 65. 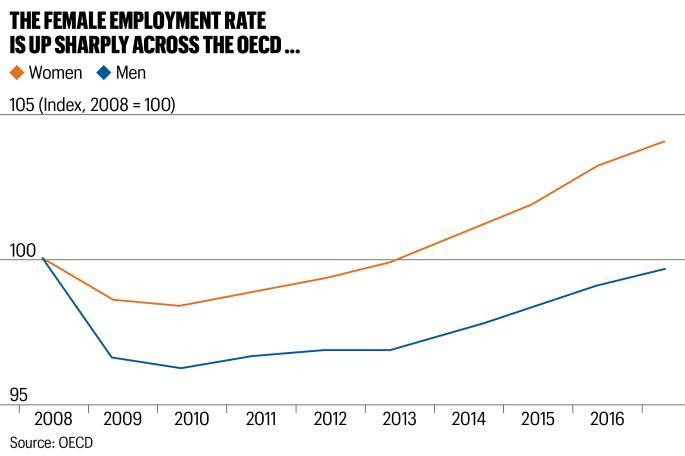 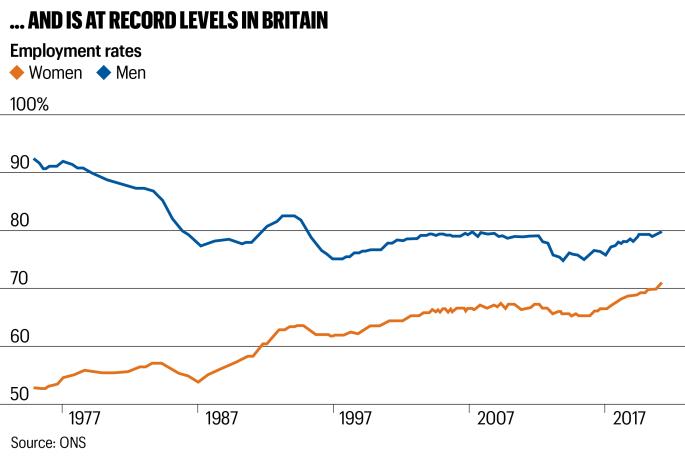 There are long-term trends at work here. And this — along with the fact, as the OECD points out, that what is happening is international in nature — suggests changes in the pension age are only a small part of the story.

Government policy has made a difference, both over the decades of rising female employment and more recently. Improved childcare arrangements and assistance, and enhanced parental leave, have had an impact — and not just in Britain.

In the mid-1990s, Japan had a lower female employment rate than most other countries. Now it is in the centre of the pack thanks to targeted policy and campaigns aimed at increasing the proportion of women in work.

The relative success of women in the workforce is also explained by the shifting patterns of employment and output in the economy. Manufacturing and construction are, despite the best efforts of companies in these sectors, male-dominated. These sectors are, moreover, the laggards for output and jobs. Employment in both is down on pre-crisis levels, as is output.

Employment in more female-friendly service industries, on the other hand, is about 2m above pre-crisis levels in Britain. And output in this dominant sector of the economy is also significantly higher than it was.

This, while creating opportunities, also presents challenges. In some of Britain’s old mining and manufacturing areas, the absence of traditional male jobs has led to a decades-long blight.

The service sector is also more likely to be associated with flexible working arrangements. Part-time employment is still relatively unusual among men: only 13% are part-timers compared with 42% among women.

This relative shift towards female employment — since the crisis, the gender balance in the workplace has risen from 46% women to 47% — is welcome. But it may have another consequence, which can be added to the explanations of why the growth in wages has been so weak in recent years.

“That [must be seen] in conjunction with what we know about women’s wages — that women are paid less than men. You’ve got more women employed, as compared to men, so the algebra works out to be a downward pressure on wage growth.”

Compositional changes — shifts in employment between sectors and high and low-skilled jobs — have been an important factor in the weakness of wages in recent years, alongside poor productivity, a weak bargaining position for employees and an acceptance by many workers of 2% pay increases as the going rate. In an ideal world of pay equality between the sexes, this particular compositional change would not matter. In the real world, unfortunately, it does.

PS
What is the mood out there? The Federation of Small Businesses says optimism among small companies has dropped to its lowest level since immediately after the EU referendum, with “unprecedented political and economic uncertainty” the cause.

Businesses are indeed uncertain. Recently, CIL Management Consultants surveyed the mood among its customer base of management teams, private equity investors, debt providers and advisers in Britain’s middle market — companies with a turnover ranging from £10m to £1bn.

Perhaps the most interesting result concerned the economic and business outlook. By more than three to one, 54% to 16%, respondents said they were negative about prospects for the next 18 to 24 months. They expect a bumpy ride. Brexit and political uncertainty are the biggest concerns, together with workforce worries. Most also think credit markets are too loose.

But in the medium to long term, 5 to 10 years out, the middle market takes the opposite view to the economist John Maynard Keynes — in the long run, we are all dead — and expects to be very much alive. This time, by 50% to 21%, respondents were positive.

Does this tell us there is a direct line from Theresa May’s Florence speech to the sunlit uplands beyond? I suspect not. Business will welcome the proposed two-year transition, long-argued for here against the no-deal ninnies, but huge uncertainties remain. Every business I talk to is frustrated by the lack of progress over the past 15 months — and by the extent to which so many things are still up in the air. The latest survey of business conditions by the Bank of England’s regional agents found that “uncertainties concerning the UK’s future trading arrangements continued to deter investment”.

What the longer-term view may reflect is the natural optimism of business people in Britain to make the best of things even when they turn out to be a bad job — to believe that something always turns up and there will always be opportunities. That natural optimism should be welcomed. We will need it.