When a company, and its shares, have done as well as SSP’s since its stock market debut in summer 2014, investors are inclined to ask just what could go wrong. That float was at 210p; the shares hit another high of 472½p yesterday, up 14¾p, on a set of halfway numbers that beat expectations, particularly on the volume of new business wins at airports around the world.

The three drivers for increased performance are still operating. SSP is enjoying like-for-like sales growth at airports as passenger volumes increase and more products go through its restaurants, bars and stores, although growth is limited at its UK rail business. Like-for-like sales across the group were up by 2.9 per cent, then.

There is a continuing improvement in margins, both from efficiencies in a business that was not terribly well run in the past and from operational gearing as those new contracts come on stream and revenues rise faster than costs. 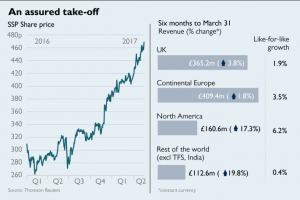 Then there is that new business, which added 3.4 per cent to revenues, with a much stronger performance from growth areas such as America, where there was an 11 per cent rise, and the rest of the world, up almost 20 per cent.

Total revenues were up 8.1 per cent, the difference accounted for by the extra contribution from the new Indian joint venture, which added 2.4 per cent to revenue growth, and the negative effect of the leap year falling into the earlier period.

That Indian business is a significant move for SSP. The company is building up to owning a 49 per cent stake by the end of next year in TFS, which is owned by a big hospitality group there, and SSP already has management control. In that market growth rates are in the high teens at airports and the rail system offers opportunities.

The question as always is how much new business is there in the pipeline. SSP is confident those net gains can be maintained at that 3.4 per cent level for the rest of the financial year and that it still has a relatively small share of the global market. The shares offer investors an attractive dilemma. On 26 times earnings they look expensive and ripe for some profit-taking. Nothing wrong with that, but further gains long term look assured.
My advice Buy
Why The shares are highly rated and it might be an idea to take some profits, but the main drivers for further growth are still there

National Grid
Make your own mind up why this might be, but shares in National Grid have so far failed to react negatively to Labour’s pledge to take the power distributor back into public control, if the party wins the general election. They were off 11½p to £10.49½ yesterday after a set of numbers that offered no obvious risk to the good yield the company has always offered to investors.

They will vote today on the 84.375p special dividend they are getting back from the sale of the company’s 61 per cent stake in its UK gas distribution business. This is over and above the inflation-linked ordinary payment, which on any reasonable reading of RPI suggests a 4.4 per cent forward yield on the shares.

Tempus suggested buying in November, when the shares were a pound lower. They were hit by the Trump election, which by inflating the yield on US Treasury bonds made such high income assets in the UK seem less attractive. Take out the one-offs inflating last year’s profits and the dividend cover is still about 1.5 times last year’s earnings. National Grid remains one of the safest income stocks on the market.
My advice Buy
Why Nothing in prospect to threaten dividend yield

Dairy Crest Group
The year to the end of March was a transformational one for Dairy Crest. It was the first during which it did not operate a volatile milk business. The investment in its Davidstow plant in Cornwall, to produce demineralised whey for infant milk powder, was completed. Unfortunately, both of these meant almost £50 million of additional costs from that investment and a final payment to Müller, the buyer of the milk business.

This pushed debt to a slightly uncomfortable £250 million, but this will reduce to a more reasonable level. For the core business, including Cathedral City, the cheese brand, it was a year of swings and roundabouts. Milk prices rose, adding to costs to produce Cathedral City, as cheese prices weakened. These began to go up again in the second half, but high cream prices put pressure on butter.

Dairy Crest decided against aggressive discounts for Cathedral City and volumes were 3 per cent lower, though they recovered well in the second half. Those brands look well enough placed now whatever the market does, with attractively high margins for cheese. Reported pre-tax profits were off 11 per cent to £40.3 million, but on an adjusted basis, taking out one-offs, they rose by 5 per cent to £60.6 million.

This leaves that whey business and its prospects in China in particular. There was a tiny contribution last year and this will chip in a couple of million or more over the next couple of years, worth having. The shares, off 26p at 590p, sell on 15 times earnings, which looks about right.
My advice Avoid
Why The rating on the shares appears fair for now

And finally . . .
To the list of global industrial businesses that seem to be doing well enough no matter how uncertain the economic outlook we can add Bodycote, which provides heat treatment services to a range of industries. Performance has been held back in the past by exposure to the oil and gas and automotive sectors but sales in the first four months of the year were up by 3.9 per cent on a strictly comparable basis, or 18 per cent if you factor in the lower pound. There is even a small cash surplus to fund acquisitions.